After fledgling attempts whilst at school, Paul’s composing and arranging began in earnest during his university years – specifically in the arena of theatre music. Commissions for Sheridan’s School for Scandal and Berkoff’s Decadence were followed by The Bald Prima Donna (Eunesco), which garnered praise from Sir Georg Solti (‘you are a very talented young man‘); and a complete rescoring of John Gay’s The Beggar’s Opera, which in turn drew favourable criticism from Joseph Heller, who attended two performances.

Paul’s attention then turned to traditional and folk material for his various bands, as well as numerous side projects. Arrangements for performance by his choir, the Andover Museum Loft Singers, are ongoing – the most recent being ‘Love Is All Around’ for the unveiling of a Blue Plaque to Reg Presley in Andover, in front of the
The Troggs past and present.

Many of the tracks for live performance and recording have been the results of collaboration; conversely, the two Kynaston albums by Belshazzar’s Feast and Bellowhead favourite London Town have been solo initiatives.

More recently, Paul has returned to musical drama. In 2011 he and Bellowhead’s Andy Mellon were invited, along with Orlando Gough, Mira Calix and Emily Hall, to contribute to a cycle of filmed mini-operas for Streetwise Opera. The result was The Hartlepool Monkey, based on a folk legend. The quartet of pieces, entitled Fables, was subsequently nominated for an award by BASCA.

The following year saw three further projects. The first was original incidental music and song setting for The Central School of Speech and Drama production of Shakespeare’s Anthony and Cleopatra, for director Ben Naylor. Changing Landscapes, or What Dobbin Saw was commissioned by Broadstairs Folk Week and included settings of ballads and poetry, with texts by Siegfried Sassoon, John Betjeman and T.S Eliot. A celebration of the Hooden Horse tradition of Thanet, the premiere at the Folk Week involved an orchestra of children, a community choir, a morris side, and a host of folk luminaries  –  Jackie Oates, Paul Hutchinson, Sam Sweeney, Andy Turner, Pete Flood and Ian Giles. In the autumn of 2011, Paul’s original song settings and instrumental pieces featured in The Dark Entry, a Canterbury Festival commission from Donkeywork, based on the Ingoldsby Legends.

The following year Paul was commissioned to write The Seven Joys of Mary, a work for choir and organ for The Choir of Somerville College, Oxford, released on a CD of Advent music by Stone Records in 2013 . 2014 saw a return, as composer for and performer in As You Like It, to The Central School of Speech and Drama.

In 2016 Paul was commissioned by BBC Radio 4’s Playing the Skyline  to write a musical portrait of the Stokenchurch Gap, the cutting through the M40 in the Chilterns near High Wycombe. The result was the solo work Kites, Cars and Cor Anglais, which when broadcast was accompanied by interviews recorded before, during and after the compositional process

Last year Paul  rescored the The Transports, Peter Bellamy’s ballad opera on the First Fleet of convicts sent to Australia. Having transcribed the melody lines from the classic 1977 recording, he  sketched new arrangments,  fleshed out by the performers – Faustus, The Young’uns, Rachael McShane, Nancy Kerr, Greg Russell, and writer and storyteller Matthew Crampton. The production received a 5 Star review from the Guardian, and was recorded live at the BBC Radio Theatre for broadcast on BBC Radio 3 in January 2018.

Paul’s appetite for  and skills in research were developed during his 2004-5 studies for Masters in Music at The University of Newcastle (Distinction). 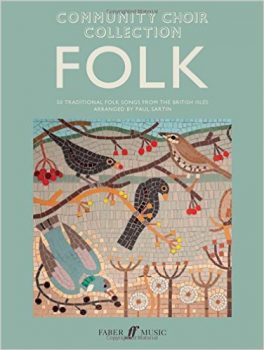 His most recent book, Community Choirs Collection – Folk comprises 50 arrangements of traditional songs from the British Isles, reflecting the rich linguistic and cultural traditions thereof. Intended for use by amateur choirs, notation readers and non-readers alike, it is accompanied by extensive biographical and historical notes and images, and is published by Faber Music.

Edited by Paul, and Bob Shatwell, Hampshire Dance Tunes (Hobgoblin) is a selection of melodies from a manuscript (ref. 210M87/1) compiled by Richard Pyle of Nether Wallop, Hampshire and now stored in the archives of the Hampshire Record Office. Dated ’19th January,1822′, the manuscript book contains 171 secular tunes and a few psalm and hymn settings in the back.  The collection has been published alongside a companion CD on the WildGoose Records label, containing both audio and MIDI files. Co-produced by Paul, it features Mat Green and Andy Turner, Tim Laycock and Colin Thompson, Will Duke and Dan Quinn, Roger Watson and Bob Shatwell, the Burseldon Village Band, Saul Rose, and Paul on oboe and violin.

Paul assisted in the editing of  two books of selections from Nathaniel Kynaston’s early 18th century dance tune collections. Mr Kynaston’s Famous Dance’ and ‘The She Favourite’ were compiled and overseen by specialist dance caller Andrew Shaw, and accompanied by albums of the same name by Belshazzar’s Feast. He also helped with editing and transcription on the Mel Bay English Fiddle Book (2011).

Paul has had a number of his psalm chants published; by Christ Church Cathedral, Oxford, and in the chant collection ‘Cantica Nova’ (Kirklees Music).

His setting of W.H. Auden’s ‘What’s in your mind?’ was the only song incorporated into ‘Jellyfish Cupful’ (Ulysses), a book of tributes to the poet and academic John Fuller who was a friend of Paul’s in his Magdalen days.

Paul is Editor and Author of Bellowhead – The Songbook (Faber Music, 2014)